The ecology of sponges at Palmyra Atoll: variability, introduced species and their potential direct and indirect impacts

Palmyra Atoll is located 1,930 km south West of Hawaii (5°53’N, 162°05’W) and lies toward the northern end of the Line Islands in the north Central Pacific. Palmyra is a U.S. National Wildlife Refuge (USFWS) and part of the Pacific Remote Islands Marine National Monument (proclamation 8336) established in 2009. Together with neighbouring Kingman Reef, Palmyra represents a biodiversity hotspot in the Central Pacific. The atoll is approximately 12 km long, comprised of 50 islets with 4 lagoons and a surrounding near pristine reef system. Palmyra has remained essentially uninhabited throughout its history, with the exception of the U.S. naval presence during WWII, and is now co-owned by The Nature Conservancy (TNC) and the United States Fish and
Wildlife Service (USFWS). The only inhabited island is Cooper Island, which is also the location of the field station.
Figure 1 (left) An aerial view of Palmyra Atoll  and (right) a photo of the lagoon facing the metal "Dolphins". These Dolphins are the remaining structural posts of one of the WWII docks (where, if you've read of the double murder on Palmyra, is believed to be the place where Buck moored his boat) and the location of the vast majority of my work.

Murky history of the Atoll 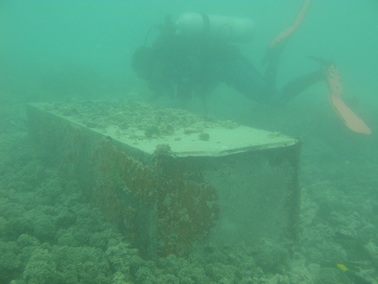 Despite the lack of habitation by humans on Palmyra Atoll it is steeped in a rich and colourful history, including attempted guano farming, many shipwrecks, reports of Spanish gold,  WWII military occupation and a double murder. Now as a marine research station hopefully the atoll will have a brighter future than its past. There are a number of websites which can tell you more about the historical events at Palmyra. My one connection to the past events is the discovery of a 5ft long steel box in the very murky lagoons  by my colleague and I whilst we were doing my sponge surveys. The body of one of the victims of the double murder still to this day has not been discovered, perhaps his remains lay here?
Figure 2. A metal box right near one of my sites in the lagoon at Palmyra Atoll

An atoll is formed when a volcano or land rises from the ocean. Coral grows where it can, normally forming a reef around the rim of the land. As these reef-building corals grow they build a calcium carbonate skeleton around their soft polyps to protect themselves; that's why this group are called Scleractinian corals. These skelton layers over time build on top of each other, then as the land subsides and erodes all that's left is the reef which forms the only visible land (islets).  The center of the ring of coral is known as the lagoon, which will also grow coral. It is an astonishing feet of biological engineering that takes thousands of years to form and results in the idyllic coral atolls we enjoy today. All reef systems support thousands of species and provide coastal protection and food for millions of animals including humans.
​
An Atoll's central lagoon often provide a refuge for species from the ocean and often form their own unique ecosystems. Below is a photo taken on the Western Terrace reefs at Palmyra Atoll, which is renowned for it's near-pristine reef system. In contrast the picture below is of the lagoons at Palmyra which were heavily modified during WWII and now look like a murky sandy lake and instead of supporting a diverse reef system, is now is dominated by sponges and algae.
So my research aimed to look at:
1) What sponges were in the lagoon?
2) Are any of the sponges introduced?
3) Are the sponges stable in the lagoons?
4) Do the sponges have the potential to extend from the lagoon on the surrounding near-pristine reef?
5) What impact are they having on the water column, which subsequently flows out onto the reef?

Below I will very briefly answer these questions. If you're interested in finding out more about my research then my thesis can be found via this link. 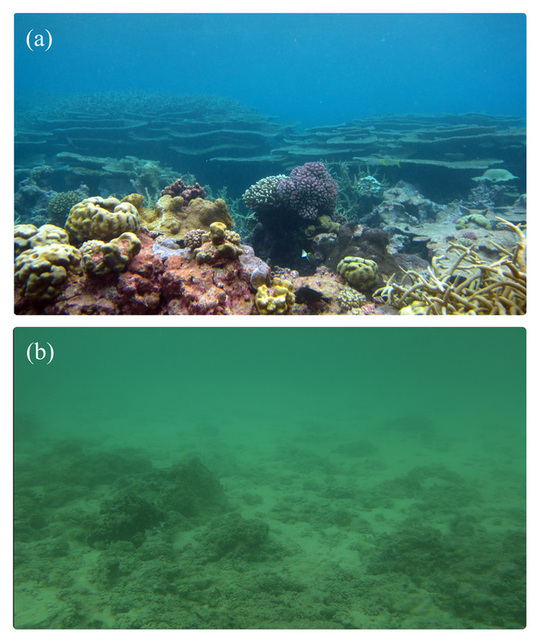 Figure 3 Photo taken of the reef on the Western Terrace (a) and in the lagoons (b) at Palmyra Atoll, Central Pacific

1) What sponges were in the lagoon?

We found 36 species of sponge on the boulders in the lagoons at Palmyra Atoll and 15 on the reefs, giving a total of 51 species across the atoll (although I don't believe this to be the final number). Below are some pictures of the species we found.
Figure 4 Some photos of the species of sponge we found in the lagoons at Palmyra Atoll

2) Are any of the sponges introduced?

Using genetic techniques we looked more closely at one species (Haliclona caerulea) and found that it has potentially been introduced to Palmyra Atoll from the Caribbean via Hawaii. Below is a photo of H.caerulea from those different locations. Notice the different shapes and colours is can be, that's because this sponge often grows with a red calcareous algae (Jania adhaerens), making the sponge appear purple, which is different to it's normal blue colour. 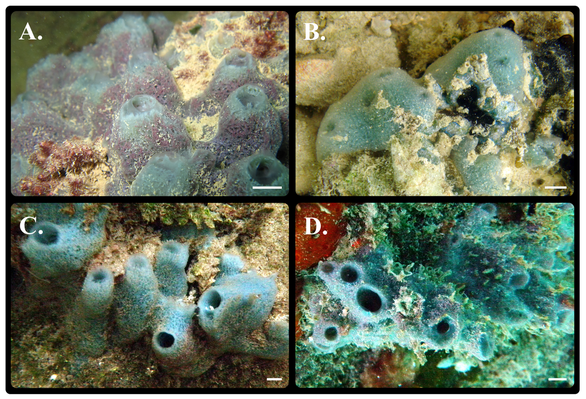 3) Are the sponges stable in the lagoons?

After doing multiple survey of sponges in the same locations over time we found that the sponges are stable in the lagoon. We also looked at settlement tiles and the sponges are capable of settling on new substrates. With these two pieces of evidence it suggests that the sponge mortality and recruitment are in equilibrium and are therefore stable.
​This raises an interesting question. If there were corals in the lagoon before, but the sponge population is now stable in the lagoon has there now been a phase-shift in the lagoon? If this is the case then we believe this is the first instance of this to occur outside the Caribbean.
Figure 6 (left) Me carrying a quadrat (for sponge surveys) next to one of the metal dock piles (Dolphins) and (right) me conducting sponge surveys using the quadrat.
Figure 7 Photos of the settlement tiles in the lagoon

4) Do the sponges have the potential to extend from the lagoon on the surrounding near-pristine reef?

It's unlikely the sponges will leave the lagoon for a number of reasons:
1) The lagoon species list is completely different to the reef list, with no crossovers.
2) The type of species we found in the lagoon are generally found in murky conditions
3) Our modelling suggests that the sponges "prefer" locations with high sediment (potential food), substrate availability (boulders, not coral or sand) and low variability in water flow (i.e. not on the reefs where water flow is highly variable)
4) The main water flows west out onto the reef, but the introduced species (H. caerulea) extends all the way from the west (it's introduction site) to the East lagoon (opposite to the water flow).

5) What impact are they having on the water column, which subsequently flows out onto the reef?

Sponges pump water through themselves to pull out tiny particles on which they feed. In order to get enough food they have to pump several gallons of water through themselves everyday. A sponge the size of 1 gallon of milk can filter all the water in a 25m long pool per day! It's quite impressive! Therefore if the lagoons at Palmyra are now full of sponges when they didn't used to be this could potentially have an impact on the water which flows out onto the reef. So we looked into calculating how quickly all of the sponges would filter all of the water in all of the lagoons, and with error included we worked out it was a surprising 3-6 days! Then with further calculations we found the sponges are having a negligible affect on oxygen levels, but did remove a considerable amount of dissolved organic carbon, so might be acting as a carbon sink in the lagoons. This suggests that the sponges are more likely having a positive effect on the water in the lagoons. 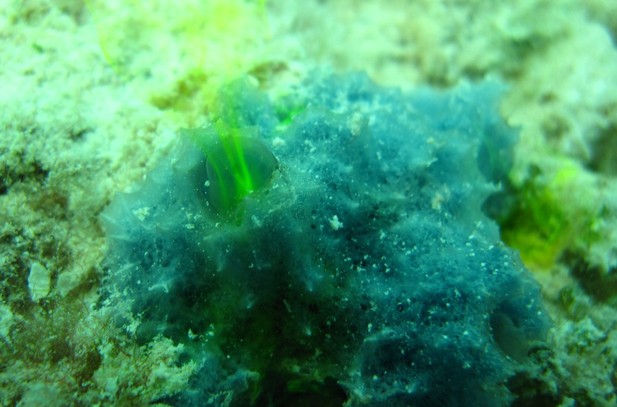 Figure 8 A photo of a sponge pumping Fluorescein dye from the base of it's body (right of the image) and out through the oscula, where sponges expel waste water.
Here's a compilation video demonstrating the normally invisible, yet amazing, ability of sponges to pump gallons of water a day. The video was filmed in-situ whilst diving in the lagoons at Palmyra Atoll.The green liquid being injected near the sponges is called Fluorescein dye, which is non-toxic to the sponges or other marine organisms. The ruler behind the sponge was used to measure the rate of water expulsion, which was then added to calculations to estimate how quickly all of the sponges in all of the lagoons at Palmyra can filter all of the water in all of the lagoons, which was an impressive 3-6 days!